This is a followup on my recent blog posts about monitoring my fleet of Raspberry Pi’s with statsd and a very simple monitoring script on the Raspberry. Please check the following posts about this series:

The first part already had the CPU temperature as a proxy for environment measurements, and I could see that with open windows in my living room the temperature was dropping with every summer thunderstorm. But of course more can be done.

If you want to follow along, be prepared to wire up some electronics parts. No soldering is required. Just plug an pray… 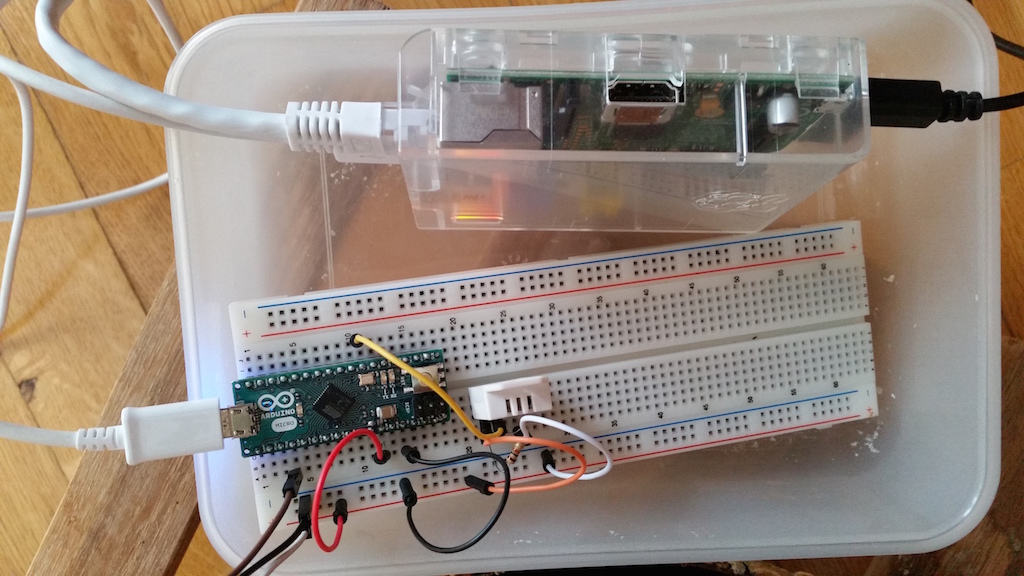 Before we start, I wanted to share my thoughts about some of the choices to be made along the way, and why I decided on one approach or another. This may not all apply to your situation, as my decisions were influenced not only by the “best” solution, but also by parts I had available, knowledge already in my brain, etc.

So, to start with, what do I want to measure? In my case, I want to eventually build a system which can water my indoor and outdoor plants during my vacation. So I will also have to control pumps, valves etc. based on the measurements taken. But this comes much later, first lets measure the following:

There are some sensors available for this, I have chosen the

Hey, wait, analog? The Raspberry Pi does not have any analog IO. I could add an anaog IO board like Custard-3 to the Raspberry, but that looks like quite a bit of stuff and it’s not cheap, would it not be simpler just to use an Arduino instead of the Raspberry?

Clearly this would be nice for the analog I/O, but then the Arduino is usually missing an internet connection and when it has network it also requires add-on boards and is not that cheap any more.

There is hope in the near future, if this kickstarter project is successfully delivering its promise: Wino-Board - an arduino with wifi for small money.

Ok, I have ordered some of these, but I do not want to wait, so here is the approach: The Raspberry is connected via USB to a small Arduino controller, which reads the sensor data and returns it via the Serial Connection provided by the USB in a JSON format. On the Raspberry there is a small Python script which runs every minute via crontab, reads the latest data and sends it to the monitoring server.

People think that men do not like shopping. Here we have a proof of the contrary. We will need to buy a few parts, and also some tools if they cannot be found in the household somewhere.

You can go to an electronics shop, but most cities don’t have this any more. You can buy online in many places. Since this is just a fun project for me, and neither delivery time nor quality is absolutely critical, I have bought most of the stuff on amazon, ebay, aliexpress directly from chinese suppliers. So far all of the orders have worked well and within 14 day or less I had the correct product (well, sometimes I ordered the wrong part, but that’s another story). The only time I got a chip with bent legs was when I bought it in a shop and carried it home in my backpack.

As for tools, I have bought a multimeter, which is useful, but still not absolutely necessary for this project.

So how do we program an Arduino? The easiest is to download the Arduino IDE and hook up your Arduino via USB to your PC or Mac. Works fine.

But then to run the software you need to unplug from your Desktop and connect to the Raspberry. Not nice. Also, if you bought one of the cheap Arduino Nano clones from China, they may have a different serial chip (CH340 instead of ftdi), and you would need to download a driver from a chinese website to your precious desktop. Can’t you run the Arduino IDE directly on the Raspberry?

Answer is: Yes, we can. You do not even need to download a driver.

So we first do an upgrade of Raspbian to Debian Jessie, as described in this stackoverflow discussion.

Takes a few hours, and since we did the setup of monitoring for Raspberry in the first two parts of this series, we can now see how the upgrade goes: 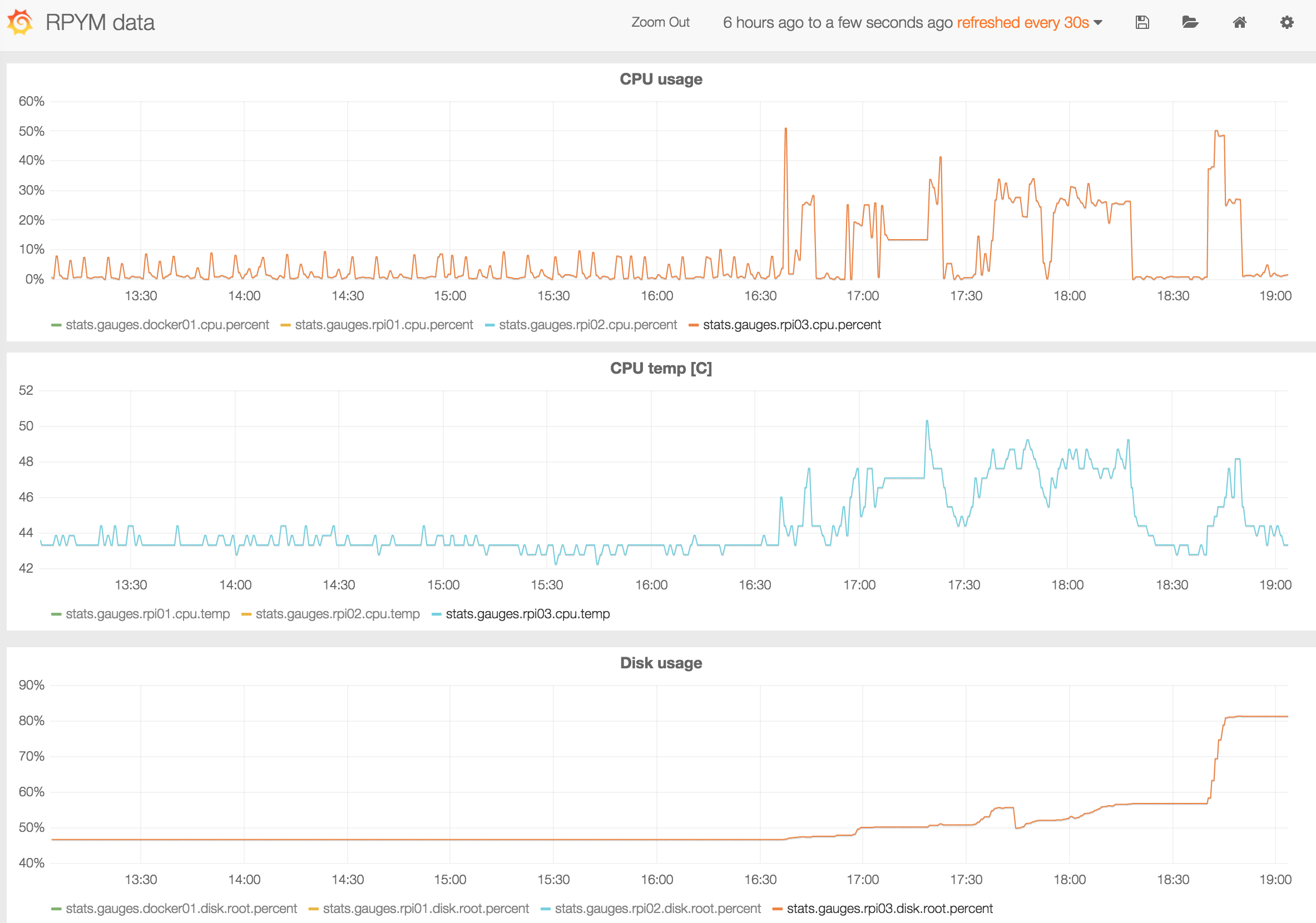 You see that the upgrade gives the CPU a bit to do, takes about 2-3 hours on a Raspberry Model 2and needs quite a bit disk space (I have a 8GB disk)

I have read that the jessie upgrade has some issues if you have your display manager directly on the Raspberry, but I have not tested this. For me, with ssh only, the issues after this upgrade were:

Next I have combined the information from these sources:

This results in the following to install the 1.6.5 Arduine IDE on Raspberry Pi:

How to test the install: In my case, I have no display connected to the Raspberry, so I connect to it from my (Mac) desktop with “ssh -X”. Then on the Raspberry I start the IDE with the command “arduino” and see it coming up on my screen: 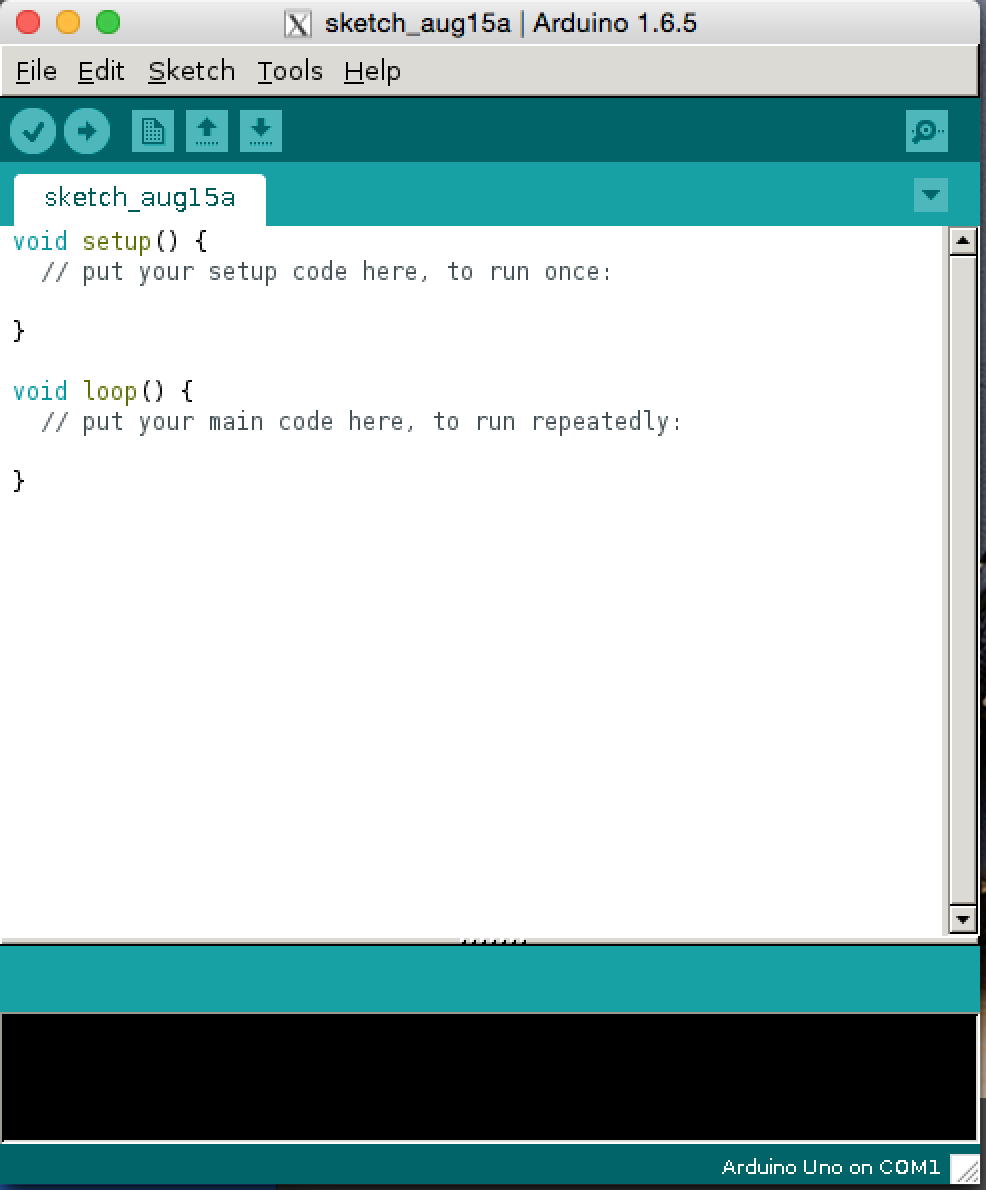 There are sample programs included in the Arduino IDE, but I wanted to make my own to show the communication from Raspberry to Arduno and back.

In the Arduino IDE, select your Tools->Board and the Tools->Port

and try to push the code to the Arduino with the “Upload” button. 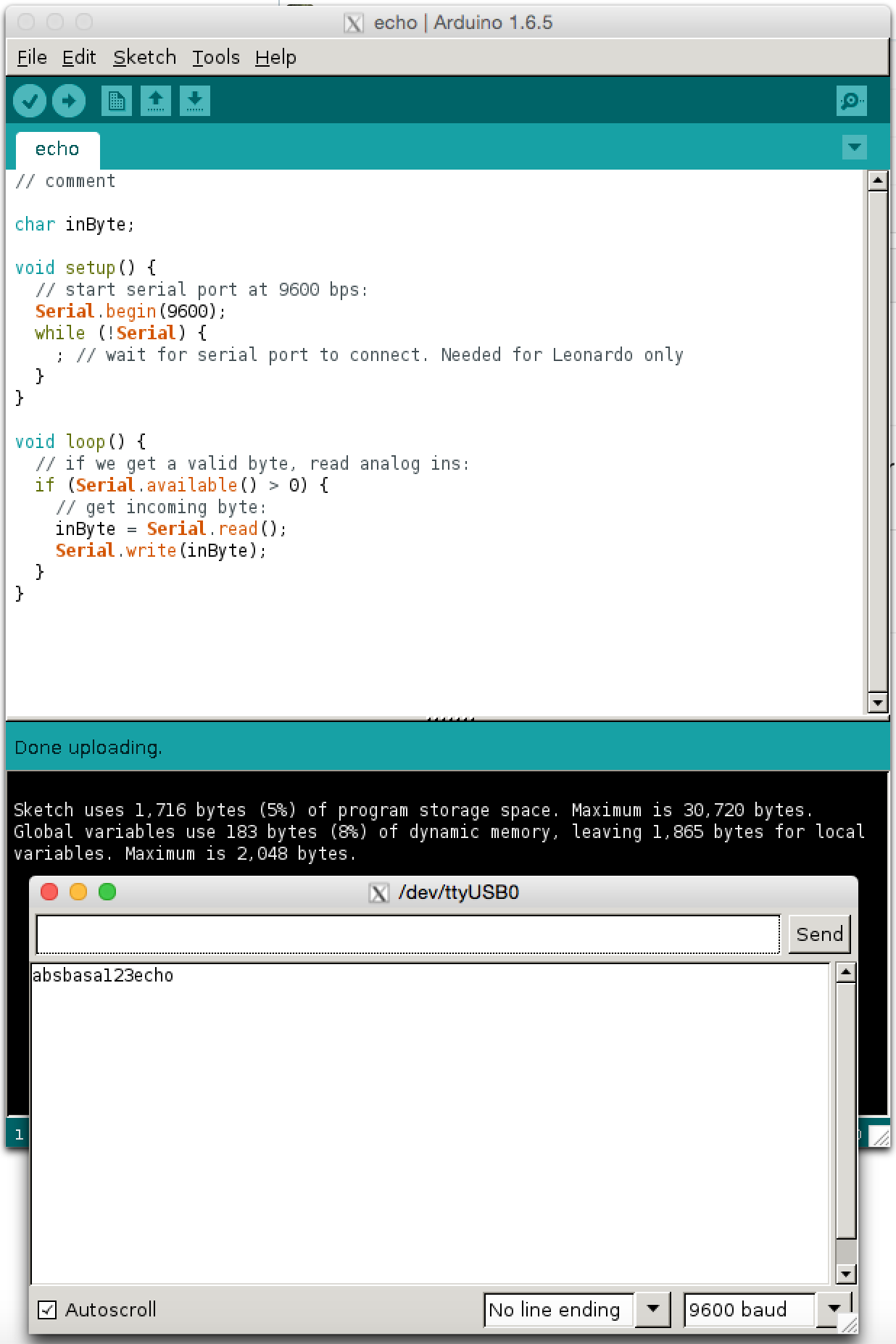 For connecting the Hardware we use a breadboard and it should look like the image below. You can also download the Fritzing design file and the parts list from ithe “circuit” folder in my git repository. 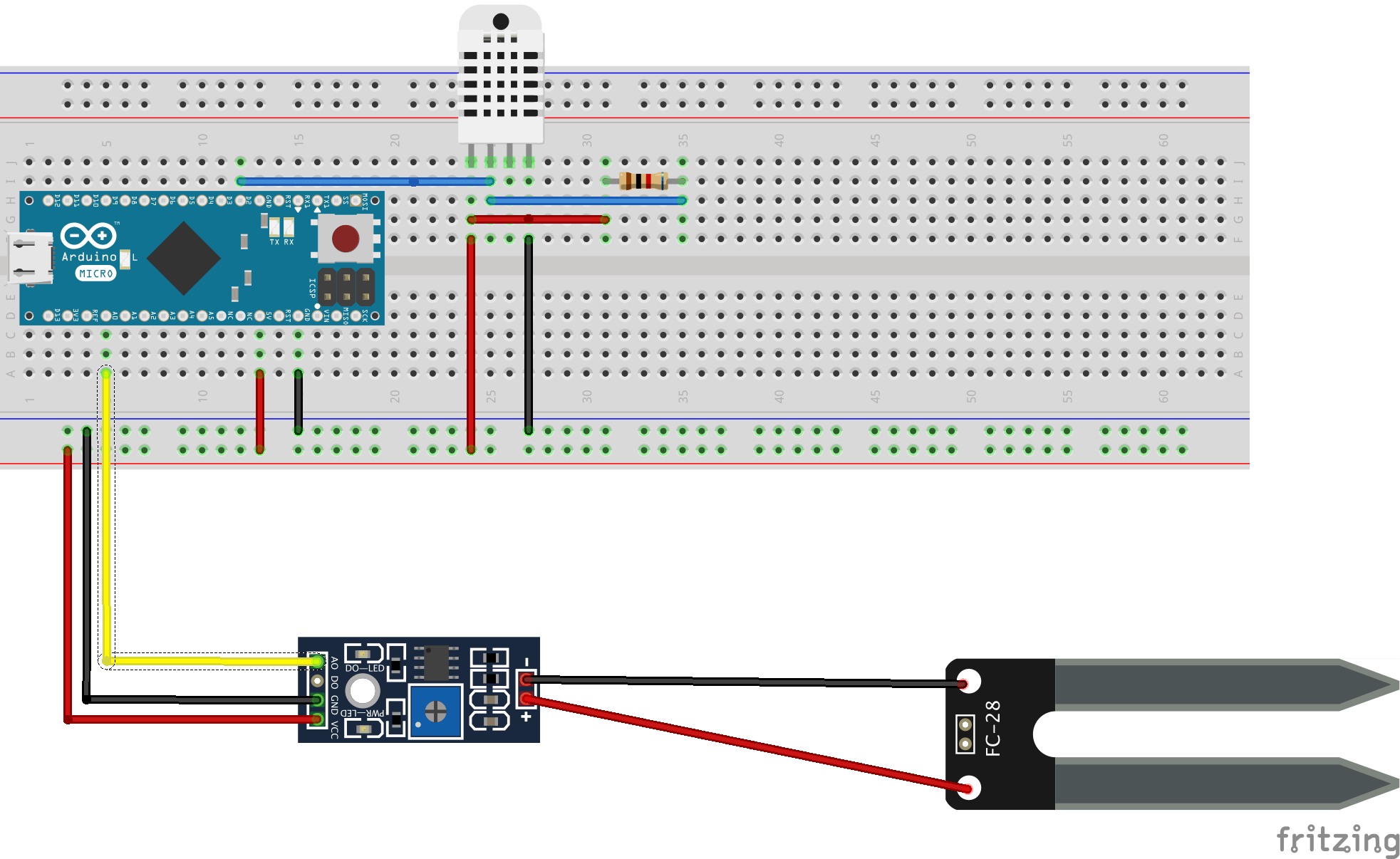 For the Arduino we have now set up all the tools, so we can write our program. In Arduino terms this is called a “sketch”, it will be wrapped into some standard boilerplate code during the compile process, For example, the standard main() function does not need to be written, it is just a few lines of code like this:

You just provide the setup() and loop() functions.

I have shared the code I use to read my two sensors on github in abarbanell/arduino-sensor but it is relatively short.

You need to install the DHT-sensor-library to communicate with the DHT-22 sensor.

Then you just open my code in the Arduino IDE and upload it to your Arduino, but of course after checking and potentially changing:

Now if we connect the arduino with the USB port of the Raspberry it will be powered up and start automatically. On the Raspberry I have just a simple Python script running once a minute from the crontab, which will then read the data from the Arduino and send it off to our statsd server:

see also on github in the script mon-sensor.py.

Please check that the name of the USB device is correct, the value /dev/ttyACM0 works for me with the Arduino Micro, while I also have an Arduino Nano clone (from China for just $2.95!) which would be talking via /dev/ttyUSB0.

So here is how it looks in the real world: 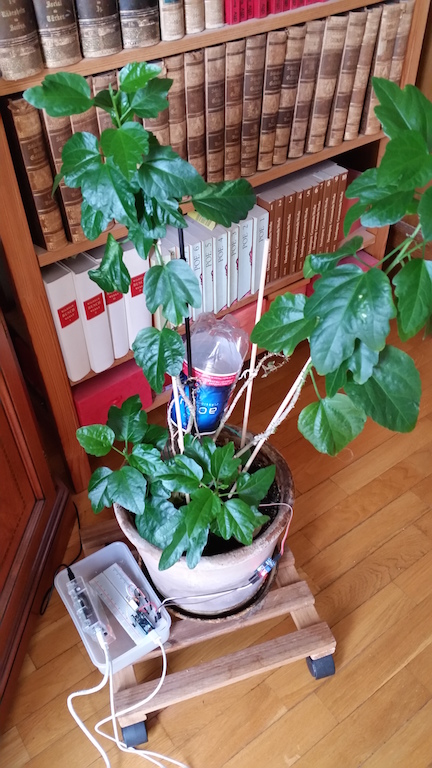 I hope you like this little toy project, this is the data from the online presence of my plant: 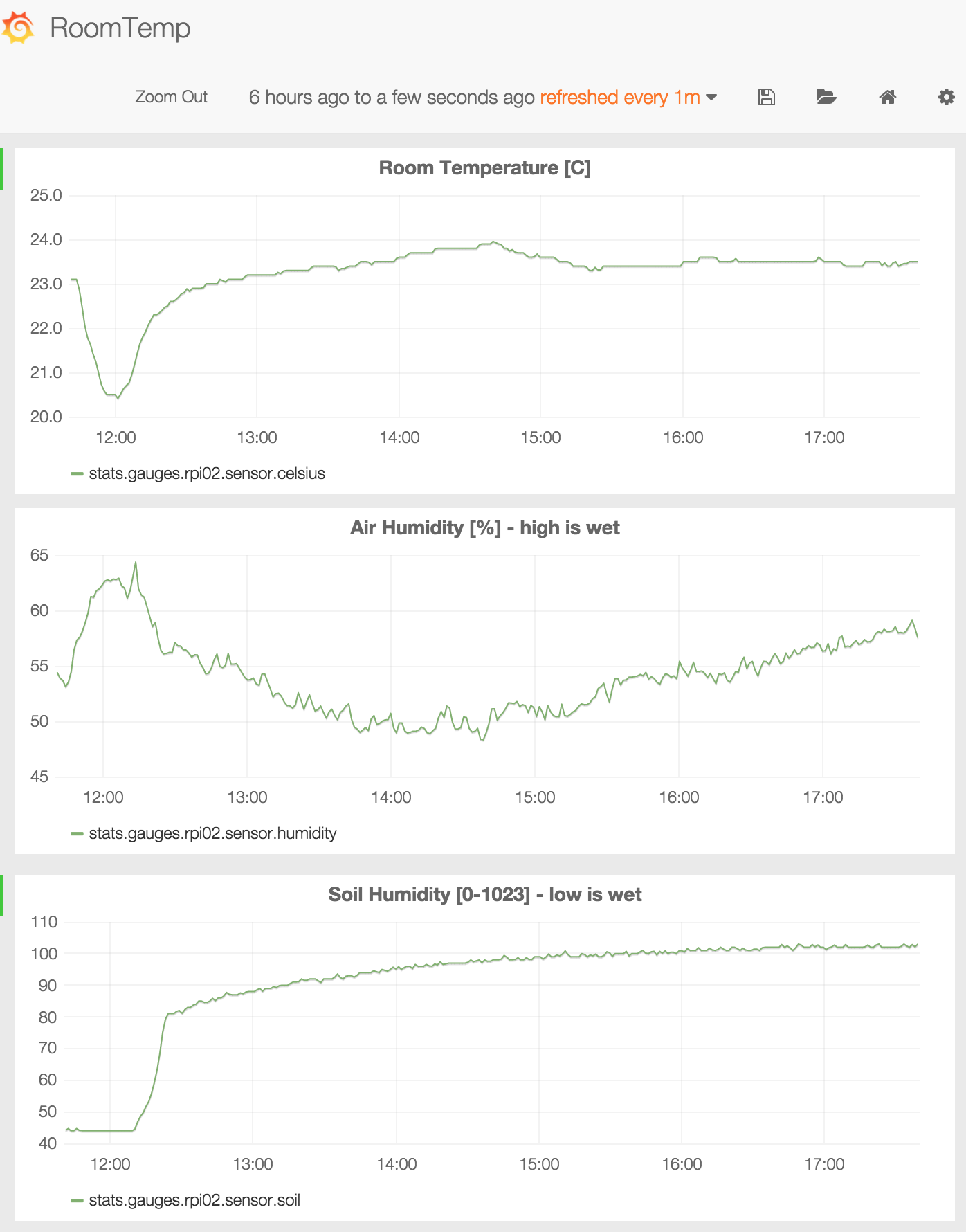 I will need to learn from this data when my plants needs to be watered so that I can set the right thresholds later when it is about actually pumping water into the pot.

Also, some thoughs about reducing the cabling (wifi would be nice to save the network cable) and waterproof packaging of the lot would be good to apply it in outside scenarios.