Scaling Scrum is a big discussion point in the community of Agilists. Here are a few experiences to consider when scaling SCRUM to multiple teams. Most people see this in the light of choosing one of the dominant scaling Frameworks, SAFe or LeSS - But I found enough things in each of them which I did not like, so I would suggest SYoW - Scaling Your own Way.

These are purely personal views, of course. But I am very much interested in your views as well, positive or negative. Let me know in the comments below.

I just don’t like the complexity of this model, and first of all the approach of having all the sprints of a Release Train synchronized with a joint Demo. I have not seen this as a practical option:

Only meeting lovers should go for SAFe. Just kidding. If your business or your system architecture forces you to integrate all teams for the release, then SAFe probably has a point. However, you should step back and think whether these are actually impediments for a true agile team. Examples of reasons might be:

Fix whatever is in your power to fix, as these impediments will hold you back from faster time to market. But don’t wait until you have fixed everything - Implementation of agile can also be done incrementally.

The same gripe about the fixed synchronization of team sprints applies here as well.

Additionally, the concept of feature teams which should be able to work on any code base required for their allocated feature is just reeking of chaos. No ownership for the code will result in low maintainability, slow progress due to unknown code. It is neither efficient nor enjoyable for the teams. Engineering teams take pride in well written code, and want to own whatever comes out of it in production.

SYoW - Scaling Your own Way

We evolved our scaled Scrum in several iterations, and I could see critical breakpoints during our growth which required to adjust the process:

Lets look at the evolution in sprints of our process development:

We skipped this step, so I will not go into details about this. You probably just want to add a regular Scrum of Scrum session to ccordinate the teams.

Initially, we started with 3-4 teams in one offshore location, Agile experience had to be built up in the team, and we were building up our processes at the same time. Furthermore, the product owners and engineering management were in a different timezone from the development teams.

Here is what worked for us:

These are points which did not work good enough: 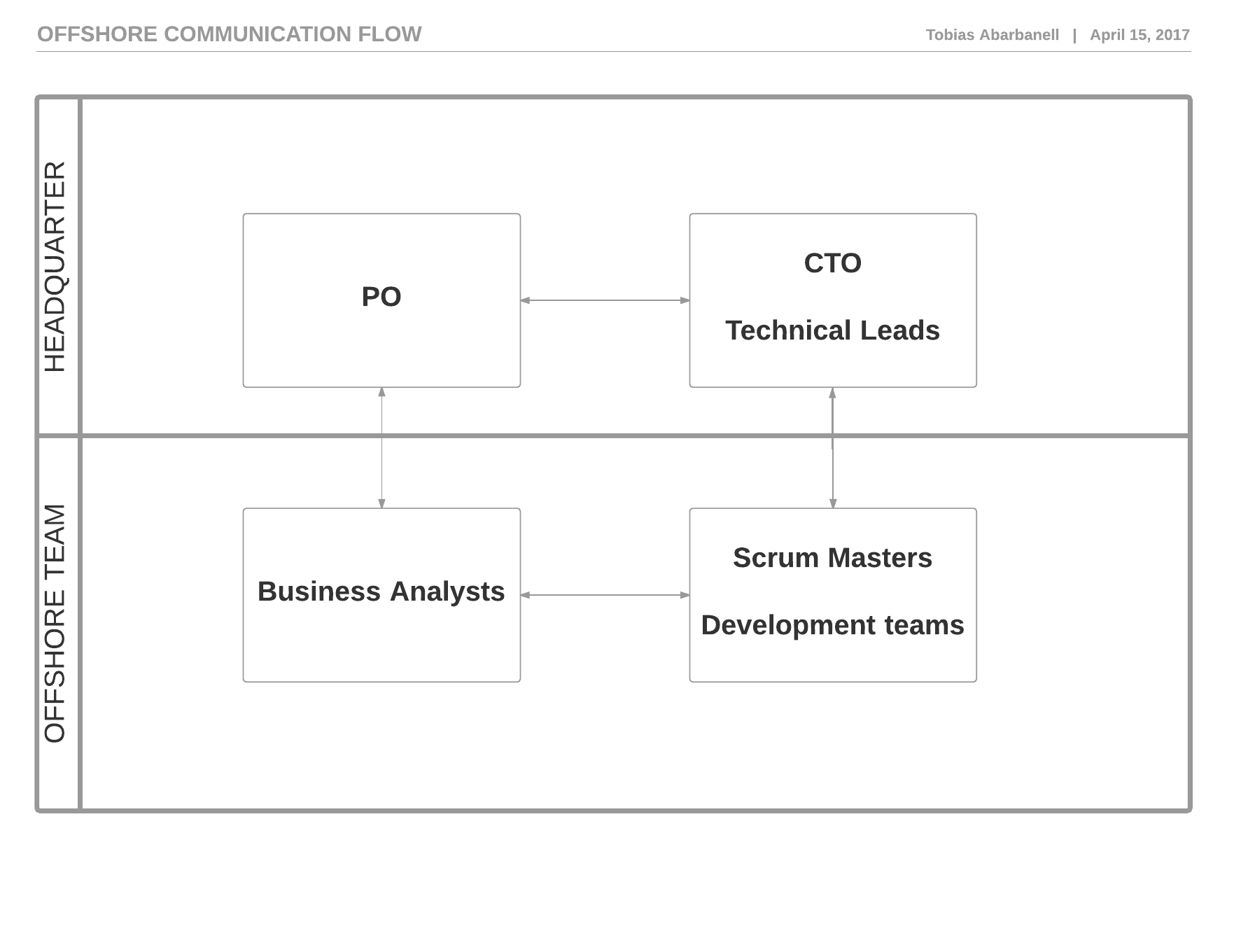 There is some duplication of work here, and we have seen this as the cost of lacking colocation.

When we grew our organisation size, we started to correct some of the shortcuts: we built the next 3-4 teams in a different location, closer in timezone. We located PO’s with the team. Most of all, we staggered the sprints so that every team was doing their demo on a different day. This allowed people to join more than just their own team’s demo, especially for PO’s and Scrum Masters this was important. Each demo was smaller in scope, and thus shorter.

We selected the subsystems for each location so that the communication between locations could be reduced by using documented API’s.

In each location, the teams had their demos at different days. This allowed participation of people in more than just their “own” demo.

We see here a good example of Conway’s Law - the organisation’s communication structure (staggered sprints as opposed to synchronized sprints in SAFe) works well in a Microservice Architecture, but not if multiple teams work together on one monolithic application. That was also the reason why the architecture which was ok with 3-4 teams, did not hold with 8-10 teams.

It follows from this that SAFe may be suitable (or necessary) if your system is architected as a monolith for each Agile Release Train.

Side comment - I also dislike the SAFe notion of a Release Train where all teams sit “locked in a train” and travel together from station to station. Sounds very inflexible to me. For us, it was the opposite: the release is the train, the teams are the passengers. If your team arrives late at the station, it will miss the release date but no problem, there is another scheduled release coming soon. The release does not wait. With a high enough train / release frequency this is not a big problem. You need only limited planning beforehand.

With the automation of test and deployment, we could shorten our acceptance test cycle. Some teams reached almost complete automatic testing, others were still working on the progress. We tried to let each team move towards full test and deployment automation, but still kept a manual trigger button on the production deploy until enough teams could get to automated testing.

Also, the PO’s needed to build their confidence by experiencing that their contribution to acceptance testing was not adding value any more - since all the value had already been added earlier in the sprint, and hence the test scenarios been automated.

It was an important decision to decouple the speed of the different teams to build their test and deployment pipeline as fast as possible, but we also dedicated time of one team to accelerate tools and knowledge sharing with the other teams.

When scaling SCRUM, look out for the communication bottlenecks in your organisation. Work can only flow if it is not held up by blockages. Iterate frequently on the product, but also on the process, to adjust your setup to your environemnt. Invest in your “last mile”, how to get software from source code checkin to the production system: Continous Integration, test automation, zero-click deployments from source code repository. Reducing the cost or releasing is the key to accelerating the whole delivery.

I am very much interested in your views, please let me know what you think in the comments below.

Looking for something else?

Enjoy some of my cat videos.

Then try this: Cowshit is the new Bullshit.

Apache Spark on a Raspberry Pi

Valentine’s Day has just passed and I still have some Raspberry Pi left, so I thought I try something out.